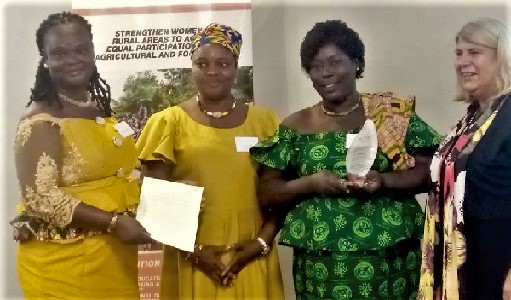 Representatives of the Avalavi Women Rice Processors Association after receiving the award for their contribution to the success of the projects from Ursula Braunewell (right), Second Vice-President of the German Association of Rural Women
30.5k Shares

The President of the German Association of Rural Women (Dlv), Petra Bentkampter, says giving women the opportunities they deserve in agriculture will not only promote food security in countries but also help achieve the Sustainable Development Goals (SDGs).

She noted that women in countries of the Global South such as Ghana covered more than 40 per cent of the workforce in the agriculture and food sector and, therefore, played a key role in rural development, agricultural production and food security.

“This makes it clear that without the empowerment of women on a multi-sectoral level, the achievement of the SDGs set up by the United Nations General Assembly is not possible,” she said.

Ms Bentkampter was addressing some rural women farmer groups from the Volta, Oti, Bono East, Greater Accra and the Northern regions at a ceremony to end two projects that Dlv was undertaking in the country for the past five years to empower women in the rural areas for equal participation in the agricultural and food sector.

The Dlv, founded over 70 years ago, is the biggest women's organisation in rural areas in Germany with a membership of 450,000.

With funding from the German Federal Ministry of Economics and Technology, the two projects, dubbed “Green Innovation Centres for the Agriculture and Food Sector” and “Strengthening Farmers’ Organisations for Sustainable Agriculture Development“, which started in 2017 and ended in 2022 were to improve the socio-economic and political situations of women in rural areas.

With the training received, Ms Bentkampter expressed the hope that the rural women in Ghana would continue to work hard and push for equal participation in the agriculture, food and political sectors.

She also encouraged women farmers to form groups and network with other groups so that they could learn new techniques and also be able to access financial support to aid their businesses.

The Project Manager of Dlv, Sophie Weissenhorn, said within the five years, Dlv had supported the development of selected women associations (members of DAA and FONG) to represent their interests at various levels.

Again, she said a business model was developed for rice farmers to improve the position of women’s associations in the rice value-added chain in Ghana and increase members’ income.

The Director of WIAD, Paulina Addy, advised the women farmer groups to translate the knowledge received from Dlv’s training into action by reaching out very wide for other farmers to benefit from the new techniques they had learnt.