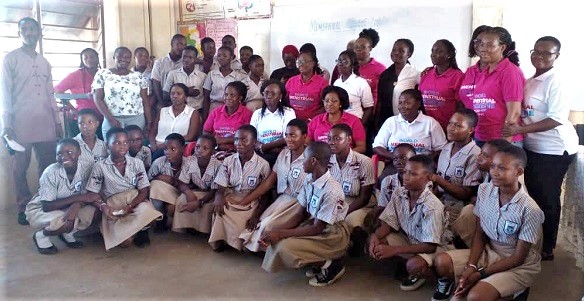 The organisers with some of the participants and students during the World Menstrual Hygiene Day celebration
30.5k Shares

The event was organised by the Guidance and Counselling Coordinator of the Directorate, Millicent Ofori-Atta; the Coordinator for School Health Education Programme (SHEP) and Girl Child Education for the district, Deborah Kwedon and the Special Education Coordinator, Benedicta Esson to create awareness of the stigmatisation girls go through as a result of menstruation.

The Municipal Director of Education, Margaret Kaba, in her opening remark said that although menstruation, was an important part of human nature, the unfortunate thing was that due to ignorance, “some girls, when they soil themselves, may be teased or stigmatised”.

She added that another problem was that, many girls who were ignorant about how to maintain proper hygiene during their menstruation ended up missing school while others, out of poverty, were unable to afford materials used during that time of the month.

The speakers took turns to advise and admonish both boys and girls on some practices to adhere to or avoid during a girl’s menstrual period.

Mrs Kwedon, who spoke on the subject, “Menstrual poverty”, said usually, those in remote areas were unable to afford menstrual products.

“This has caused many girls to trade themselves for money in order to buy the products,” she added.

Mrs Esson on her part, debunked some myths that the society was made to believe about menstruation such as, “it being bad and dirty, sporting or exercising during menstruation, it being contagious, the shame of talking about it in public, etc”.

Additionally, Mrs Ofori-Atta, cautioned against stigmatisation, reiterating that the stigma affected ladies “and our quality of life and so it must stop”.

Ms Kaba said although the government was doing its part by making sure that the subject of menstruation was taught in schools and was also building facilities like toilets for the purpose of reducing the number of girls who missed school in that period, NGOs should help with the provision of sanitary pads to help ease the burden on girls.