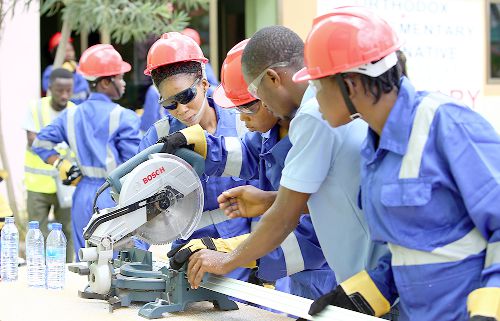 In Ghana when you think of an industry dominated by men, construction might be one of the first that comes to mind. The stereotypical image of a construction worker is of a strong man, covered in grime, wearing a hard hat and mostly uneducated.

Though women are making strong progress in joining the country’s workforce, they remain under-represented in the construction sector. Only about three per cent of workers engaged in the sector are women.

The debate on women’s participation in male-dominated economic activities in society has been on for some time now, particularly in the rural part of the country.

While some argue that women are equally capable of undertaking men’s task and even better, others believe that they are only limited to household activities.

For those who were against women’s increased participation in male-dominated economic and social functions, their argument was based on socio-cultural practices and beliefs.

Gender stereotyping, negative perception on women’s abilities, and limited number of female mentors, have been identified as some of the factors affecting female participation in the construction sector.

Well, some young women in the Tamale Metropolis have dared to change the age-long tradition as they have ventured into male-dominated professions in the construction sector such as carpentry, masonry, welding, painting, fabrication and glazing, general electrical works among others.

These young ladies who are between the ages of 15 and 35 include teenage mothers who have no formal education and school dropouts.

Sharing her experience with the Daily Graphic in an interview, Miss Bashiru Shafau Dipantiche, a 20-year-old lady who is into fixing Plaster Of Paris (POP) said as a lady, venturing into a male-dominated activity was not easy because her friends and community members made fun of her for engaging in it.

“When I started learning the work, it was so strange to me until they took us through its training processes, then i realised i could do it. I can make designs, corner moulds including fixing it to the ceiling,” she said.

According to her, venturing into the male-dominated activity was the biggest decision she had ever taken in life, and hopes to start her own business soon so that she can also train other females.

For Miss Tahiru Barikisu, a 29-year-old lady who ventured into carpentry “Sometimes people ask me why I didn’t learn dress making or hairdressing and decided to do carpentry. It has not been easy but I just closed my ears and went for it”.

She encouraged young ladies never to let people’s perceptions and cultural barriers prevent them from venturing into any economic activity of their choice.

These young ladies are beneficiaries of the Pathways for Sustainable Employment for Women and Youth (PASEWAY) project being implemented in the Northern Region by the Regional Advisory Information and Network Systems (RAINS), a Tamale-based non-governmental organisation in partnership with Plan International Ghana.

Funded by the Federal Ministry for Economic Development and Corporation (BMZ) with an amount of 3, 409,000 euros, the three-year project seeks to provide both young women and men with needs-based training to enable them to start their own ventures or get employed in the construction sector.

So far, about 521 young people have acquired technical knowledge and skills relevant to the construction sector, 100 youth entrepreneurs including 61 females and 49 males have been supported with basic tools to facilitate access to employment and business growth.

The Coordinator of the PASEWAY project, Mr Mohammed Kamel Damma, indicated that the objective of the project was to increase employability skills of young people and support them to formalise or set up their businesses.

He said “we have gone beyond the skills and looking for spaces within private organisations where they can do internship. The first component is looking at young people who do not have training or skills in the construction sector”.