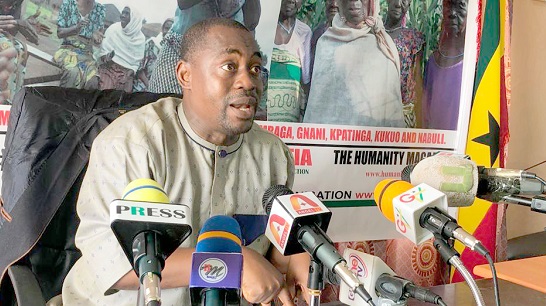 The Founder of Humanity Magazine, Yahaya Alhassan, has called on the Interior and Defence ministers to arrest witch doctors and close the witch camps in Bonyasi, Gambaga, Gnani, Kpatinga, Kukuo and Nabuli, all in the northern regions.

He said “it is very depressing to see how elderly women are mistreated and imprisoned in the witch camps. The move, he said, would “stop the ongoing criminality”.

“It is also embarrassing to see how important people in our society, including intellectuals, slip into this quagmire of abhorrent beliefs and lies told by witch doctors to put voiceless women into deplorable witch camps,’’ he added.

In a press release, Mr Alhassan said in the brutal murder of Madam Akua Danteh in July 2020, led him to petition Parliament in December 2020 to initiate action to prosecute witch doctors and close down witch camps in the country.

The release said, in response to his letter, the Speaker of Parliament, Alban Bagbin, assured him that a private member’s bill was currently being sponsored by the majority and minority leaders, Osei-Kyei Mensah-Bonsu and Alhaji Haruna Iddrisu, respectively.

The statement appealed to the Parliamentarians to fast-track the bill into law to free innocent women from what he called “captivity” and prosecute witch doctors to prevent future lynching of innocent, elderly and vulnerable women .

The statement Alhassan proposed a bipartisan support in Parliament aimed at finding a lasting solution to the problem of witch-camps in some communities in the country, including a monthly gratuity or reparation for each victim till she dies.