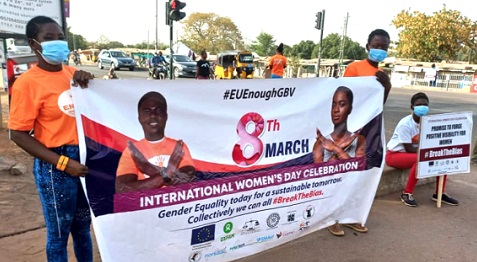 Some volunteers on a campaign on a commercial street in Bolgatanga
30.5k Shares

The Head of Programmes at Rural Initiatives for Self-Empowerment-Ghana (RISE-Ghana), a non-governmental organisation (NGO) operating in the five regions of northern Ghana, Jaw-Haratu Amadu, has stated that free medical care for victims of sexual and gender-based violence is long overdue.

According to her, although it was clearly stipulated in the Domestic Violence Act for a Domestic Violence Support Fund to be established to provide free medical care for girls and women who suffered as a result of sexual abuse and gender-based violence, it was still not operational.

She said, “As it stands now, it is very difficult for some victims of sexual assault and abuse to foot the medical bills if a medical examination form is issued to them to visit health facilities to receive medical care”.

Ms Amadu said this in an interview with the Daily Graphic during a “street storm” organised by the NGO in commemoration of this year’s International Women’s Day in Bolgatanga in the Upper East Region.

As part of the event, some women stood at vantage points along the principal streets of the regional capital holding placards with various inscriptions to conscientise the public on the need to support the growth and development of girls and women to realise their full potential in the society.

Some of the inscriptions read, “Empower women’s choice”, “Break the bias”, “Don’t tell me how to dress, tell them not to rape me”, “Promise to celebrate women’s achievement”, “Gender equality today for a sustainable tomorrow”, “Promise to forge positive visibility for women”,

“Promise to challenge gender discrimination and bias”, and “I am a woman, respect my existence or expect resistance”.

Ms Amadu stated that victims of sexual abuse who were already in pain were made to pay so much medical fees per the discretion of the medical officer, a situation which prevented many of them from reporting sexual abuses they suffered.

Move away from allocation

She stated that government, through the Ministry of Gender, Children and Social Protection, should move away from allocating funds for the Domestic Violence Support Fund to actual transfer of monies into the fund to make it operational.

“Our suggestion is that monies should be transferred from the consolidated fund directly into the support fund, so that it would always be available to take care of the medical bills of sexually abused victims” she stated.

Ms Amadu said, “payment of a percentage of the consolidated fund quarterly into the fund will help in the provision of proper medical care for victims abused sexually and reduce their struggles in seeking medical care”.

She explained that some cultural practices such as child marriage and widowhood rites had forced many girls and women into marriage, which had prevented them from achieving their goals in life.

Ms Amadu added that some of those cultural practices needed to be nipped in the bud to allow more women to have access to opportunities to achieve gender equality, saying “the cultural barriers to women should be broken to allow them to fully pursue their dreams and aspirations”.

“Culture is not cast in stone and if after practising a particular cultural norm for years and we realise certain aspects are impeding the development of women, it must be amended for the benefit of all,” Ms Amadu pointed out.

Further, she called for the inclusion of women in decision-making on issues affecting them, stressing, “we all know that the head of the family is a man but what we are asking for is for the woman to be made part of the decision-making process”.