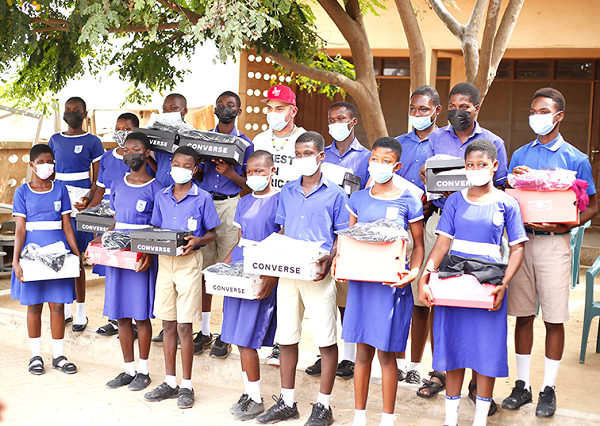 Mr T.J. Sawyer, Stylist and Creative Director of Converse-London, with the students after the presentation. Picture: Caleb Vanderpuye

‘Gifts to Ghana’ Project, a Non-Governmental Organisation, in partnership with Converse-London, has donated some items to students of the Achimota Anglican Junior High School in Accra.

The items, which were donated as part of the festive season, were made up of boxes of converse shoes and converse T-shirts.

A Stylist and Creative Director of converse-LondonMr T.J. Sawyer, who partnered with Converse-London, donated the items on behalf of the company.

He noted that Christmas was a time for giving and “this initiative is intended to give back to society, to inspire the children and also put a smile on their faces”.

Mr Sawyer explained that the donation was a way of contributing to the community and its people, where he was nurtured.

He further explained that a large part of his work was centered on tackling social issues such as racism in the form of creative cultural commentary and the active organisation of community projects.

Mr Sawyer said Converse-London was one of the main clients with whom he worked with on projects of that nature.

"it is brilliant to see all of them happy and enthusiastic about the offerings because that was my main intention.

“The hardship that many of them have faced is truly sad and I hope to be able to bring attention to the reality of life in a third world country such as Ghana, especially with this place being so close to my heart,” he added.

The Headmaster of the school, Mr Philip Arthur Laryea expressed appreciation for the items donated, adding that the items would motivate the children and boost their morale for academic work.

A student of the school, Peggy Klenam Tay, who thanked the company on behalf of the students,said they were appreciative for the kind gesture.