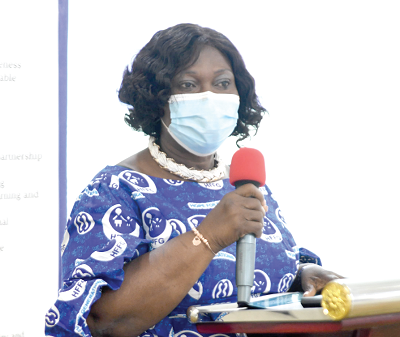 A Non-Governmental Organisation (NGO), Hope For Future Generations (HFFG), with funding from the UK government, has launched a project to help reduce stigma and discrimination against People Living With Disabilities (PLWD) and mental health conditions.

HFFG is implementing the Social Behavioural Change (SBC) project with another NGO, the PsykForum.

The SBC project forms part of the implementation of a four-year disability inclusion programme funded by United Kingdom (UK) and known as the "Ghana Somubi Dwumadie”, formally known as the Ghana Participation Programme.

At the launch of the SBC project in Accra last Thursday, which was also the project’s inception meeting in Accra, the Executive Director of HFFG, Mrs Cecelia Senoo, said her outfit and the PsykForum, under a consortium, were awarded a grant under the “Ghana Somubi Dwumadie” programme to promote mental health and disability inclusion.

She said such an SBC project had become necessary because despite interventions over the years, stigmatisation remained a major barrier to human dignity, access to human rights and socio-economic development.

She said eradicating or reducing stigmatisation at all levels was a shared responsibility requiring behavioural changes towards PLWDs and mental health conditions.

Mrs Senoo said among others, the SBC project sought to promote the use of positive language with regard to PLWDs and mental health, particularly within the media space and among the entire public space.

Mrs Senoo said the inception meeting was to, among other purposes, share the objectives of the project with identified stakeholders to help create awareness and broker relationships that would lead to effective and efficient project implementation.

“We must all work together to create a positive culture of support for all people living with disabilities and mental health conditions to enable them to reach their full potential, access basic human right services among others. This is one of the expected results of this project” she said.

Highlighting the foundation on which the project was founded, its Coordinator, Ms Marcia Halm, said the Ministry of Gender, Children and Social Protection in 2014 estimated that based on the 2010 Population and Housing Census, 20 per cent of the country’s population had some form of disability while many more experienced mental health conditions.

“As part of efforts to help the country to encourage government, development partners and stakeholders to invest more in mental health and ensure better disability inclusion, the UK government funded the Ghana Somubi Dwumadie,” she said.

She said it was also to help generate evidence to inform policy and practice on the effectiveness of disability and mental health.

Ms Halm said the project would be implemented in four regions — the Greater Accra, Central, North East and Savannah.