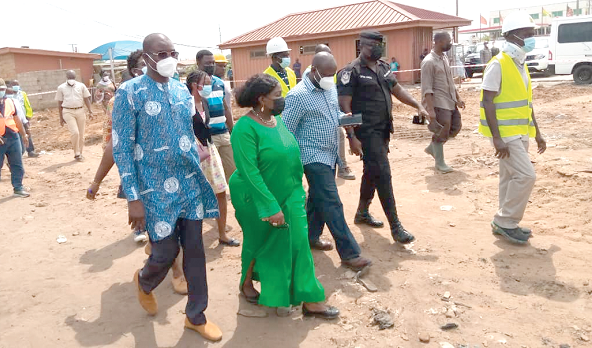 Ms Cecilia Abena Dapaah (2nd left), the Minister of Sanitation and Water Resources, accompanied by Dr Clifford Briamah, MD of GWCL (left), and other officials on an inspection tour at Gbetsile
30.5k Shares

The Minister of Sanitation and Water Resources, Ms Cecilia Abena Dapaah, has called on district assemblies not to grant building permits to people to build on water transmission pipelines.

Speaking to journalists after an inspection tour of ongoing repair works of the 42-inch diameter transmission pipelines at Gbetsile in the Kpone-Katamanso Municipality, the minister bemoaned the level of encroachment on the right of way for the pipelines and directed the assembly to demolish those illegal structures.

She noted that those illegal structures constituted serious obstruction to the pipelines’ right of way.

Ms Dapaah said permitting people to construct houses on the pipelines’ right of way was a disaster in waiting, as people could lose their lives should the underground pipes they had built on burst with water gushing out.

The 42-inch diameter steel transmission pipeline transports treated water from the Kpong Headworks to Tema and the eastern parts of Accra.

It was laid over 55 years ago and most parts have become corroded. The Ghana Water Company Limited (GWCL) is currently undertaking replacement works on the 120-metre stretch at Gbetsile.

She commended the management of GWCL for putting in place a scheme for maintenance, stressing that if duly adhered to, the entire stretch of transmission pipelines would be replaced to enable them to serve consumers better.

She, however, noted that the encroachment on the pipelines was an impediment that delayed maintenance work and tasked the assemblies along that stretch to demolish them.

The Managing Director of GWCL, Dr Clifford Braimah, said although the company had complained about such encroachment, it was the responsibility of the assemblies to take action to demolish such structures.

He called on the assemblies to enforce their own by-laws and prevent people from encroaching on service lines and buffer zones.

He said management had the plan to deploy a drone to locate and map out all such illegal structures on the transmission lines and hand it over to the various assemblies on the stretch for action.

He was optimistic that the current repair works would be completed for a test run and disinfection exercise to be carried out, after which normal service would resume.

The Municipal Chief Executive for Kpone Katamanso, Mr Solomon Tettey Appiah, in response, stated that the assembly came into existence in 2012. Therefore, the encroachment being witnessed today took place before the municipal assembly’s the creation.

He indicated that his assembly would collaborate with the management of GWCL to identify all illegal structures constructed on the pipelines for demolishing.

Mr Appiah said if the assembly was successful in removing structures for the construction of a railway line through the district, then demolishing structures on pipelines built 55 years ago shouldn't be any difficult task.