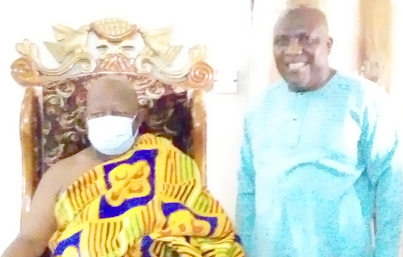 Nene Sakite, who is also the Konor (Paramount Chief) of the Manya Krobo Traditional Area in the Eastern Region, explained that the number of development projects that were ongoing in the Krobo area and other parts of the region attested to the fact that the present government was doing well and was on course and needed to be applauded.

“I, the President of the Eastern Regional House of Chiefs on behalf of my colleague chiefs and all the people in the region are solidly behind you for your success during your second term in office. We shall do whatever is possible to assist you to ensure that the Eastern Region is one of the best in terms of development in every aspect of human life,” Nene Sakite assured.

He gave the assurance during a courtesy call on him by the new Eastern Regional Minister, Mr Seth Kwame Acheampong, and officials from the Eastern Regional Coordinating Council last Friday.

Nene Sakite pleaded with the new regional minster to ensure that all uncompleted development projects in the region and the Krobo area were completed for the sake of huge investments made in those projects by the government.

The Konor of Manya Krobo mentioned the state of two bridges at Oterkporlu and Okwenya, both within his jurisdiction, as very dangerous and worrying and, therefore, requested the ministry of roads and highways to fix them for the safety of travellers in those parts of his traditional area.

The Konor also made a plea to the police administration to rescind any decision to close the Sekesua Police Post in his traditional area as it was one of the old towns in the Upper Manya that was developing fast and needed to be a police district in the near future.

Mr Acheampong congratulated Nene Sakite II on his good leadership since he took over some few months ago as the new President of the Eastern Regional House of Chiefs.

The regional minister said he had been appointed by the President to serve the  people in the region and, therefore, called on all within the region to cooperate with him.

In response to Nene Sakite’s plea about the two bridges at Oterkporlu and Okwenya, he said the two had been awarded on contract and work had begun at Okwenya and that of Oterkporlu would also be tackled soon.

Mr Acheampong also gave assurance of the construction of the dual carriage road from Tema to Akosombo, which when completed would improve infrastructure development in that part of the region.