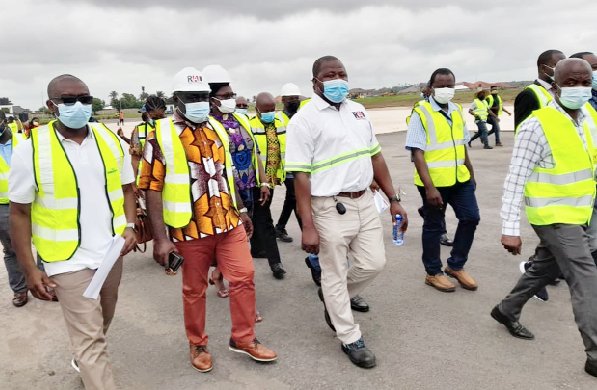 Mr Kwaku Ofori Asiamah (2nd left), Minister of Transport, being led by officials of the Ghana Airports Company to inspect the ongoing rehabilitation of the runway of the Sunyani Airport
30.5k Shares

To avert any future disaster around the Sunyani Airport, the Minister of Transport, Mr Kwaku Ofori Asiamah, has directed the Ghana Airports Company (GAC) to take steps to demolish all structures on its encroached land just near the area.

Since 2015, the airport has been closed because of the bad nature of the runway which is currently being rehabilitated.

However, encroachment at the various ends of the airport will make it very difficult for the GAC to embark on future developments to expand the facility to ensure the landing and take-off of bigger aircraft.

When Mr Asiamah inspected the extent of work done on the rehabilitation of the airport last Monday, he was very unhappy about the encroachment and indicated that buildings on the encroached land would be pulled down.

“There will be no compensation for anybody when buildings on the encroached land are demolished since the owners knew for a fact that the land does not belong to them,” he stated.

Mr Asiamah said apart from the health hazards that people living close to the airport were exposed to, the encroachment would also deny the people of the Bono and its adjoining regions, the opportunity to enjoy the services of a bigger airport facility.

Mr Asiamah also directed that building in the paths of aircraft near the airport, which were roofed with silver roofing sheets, must be re-roofed with proper materials since their reflections could be harmful for both the safe landing and takeoff of aircraft.

The rehabilitation of the Sunyani Airport, which began in 2019 at the cost of GH¢48 million, is expected to be completed by the end of May 2021 to pave the way for the safe landing and takeoff of aircraft.

Work on the 1,280-metre runway has now been completed and expanded to 1,400 metres with 60 metres safety areas provided at both ends of the runway.

Mr Asiamah commended the contractor for the quality work done and for working within the contract sum despite challenges which occurred as a result of the outbreak of the COVID-19 pandemic.

He stated that the business community and government officials had suffered for far too long because of the closure of the airport and gave the assurance that everything possible would be done to ensure the resumption of operations at the scheduled time.

For his part, the Managing Director of the GAC, Mr Yaw Kwakwa, said about 95 per cent of the project had been completed.

Mr Kwakwa explained that apart from the rehabilitation of the runway, the arrival and departure halls, in addition to other facilities such as the Fire Station, had also undergone rehabilitation.

The Bono Regional Minister, Mrs Justina Owusu-Banahene, said people in the region were eagerly waiting for the resumption of operations of the airport.

She explained that it had been very tiring for businessmen and government officials in the area who had to endure travelling frequently for a total of about 16 hours to and from Accra to transact business.