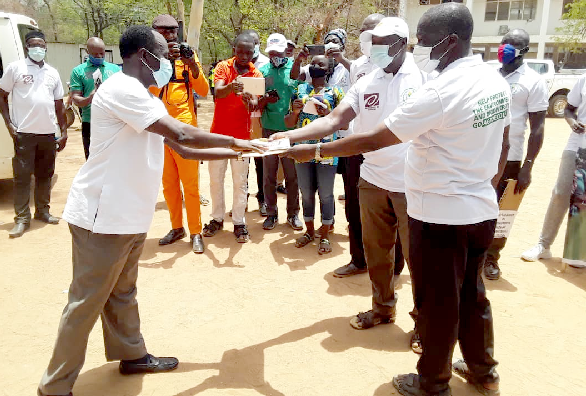 •The three organisations presented a four-point petition to Mr Francis Ennor (left), the Upper East Regional Director of the Department of Food and Agriculture
30.5k Shares

Three Organisations have appealed to President Nana Addo Dankwa Akufo-Addo to make more budgetary allocations towards the continuation and completion of all the dams earmarked in the Upper East Region under the one-village, one-dam policy.

They equally entreated the President to “use the remaining money for desilting of the existing dams that are silted."

To back their demands, the members of the PFAG, CIKOD and GNSBFA embarked on a peaceful walk through the streets of Bolgatanga last Saturday.

The organisations noted that this would ultimately help address issues of climate change impact on smallholder farmers in the five regions of the north.

“Northern Ghana is almost like a desert, all the tree cover and the vegetation is gone, the rainfall pattern is erratic and inconsistent, the high temperatures and emergence of pests and diseases are rampant,” the petition presented to drum home their request observed.

The President of PFAG, Mr Abdul-Rahman Mohammed, who read out the petition before it was presented to Mr Ennor, further intimated that the government needed to adopt more “aggressive approach in promoting sustainable agriculture to small holder farmers.".

That, Mr Mohammed noted, would require an integrated soil fertility management approach that promoted the joint use of organic and inorganic fertilisers in the short term and promoted organic fertiliser in the long term.

“There is the need to re-orient public expenditure priorities in order to focus more on important agricultural development priorities such as rural infrastructure and training in agro ecological farming skills,” the petition further stated.

The organisations, in particular, suggested investment in technologies that focused on recognising, preserving and utilising appropriate traditional and indigenous knowledge.

On agriculture mechanisation, they entreated the government to subsidise simple mechanisation services and water pumping machines for the youth to continue with dry season gardening and livestock rearing activities.

The organisations further argued that “with agroecology, we are able to still produce, maintain our soil cover, plant more trees, rear livestock and poultry leading to increase in incomes for small holder farmers."

Mr Ennor, on his part, stated that the petition would be sent to the appropriate quarters for solution. He assured members of the organisations that the government was doing its best to turn around the fortunes of small holder farmers in the five regions of the north.

The activities of the PFAG, CIKOD and GNSBFA were supported by Open Society Initiative for West Africa (OSIWA), the 11th hour project and the Joint Action for Farmers' Organisations in West Africa (JAFOWA).

The walk was aimed at sensitising the general public to the need to adopt practices and principles of agroecology in the Upper East Region.