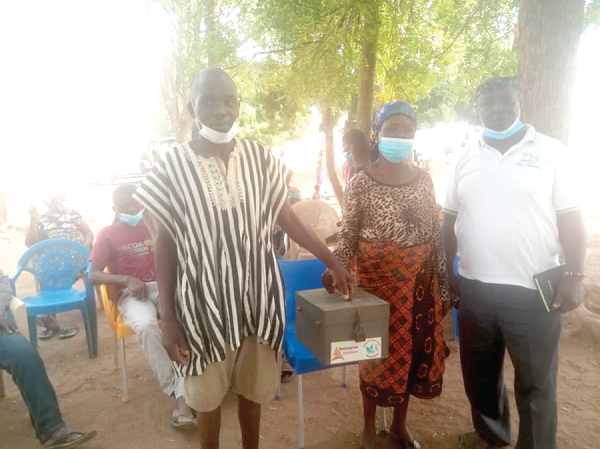 Leaders of the savings group with their box
30.5k Shares

While growing up as a teenager, I used to have a small savings box, popularly known as ‘susu box.’ It was given to me by my mother and I saved money that came my way through gifts, tips, pocket money, etc.

With my box, I managed to save enough after my secondary education to start some petty trading.

Still following the savings ideas from my mother, within a short period I was able to make a huge saving of ¢5 million in 2003 (equivalent to GH¢500 today) over a period of two years to open my first bank account, where I continuously saved money from my salary as a ‘phone card seller’.

These savings helped me to further my tertiary education with some ease; I also had some support from my parents.

Those days I felt so proud that I was independent and could acquire my personal needs as a young lady. With the springing up of many banks, I cannot tell if saving in ‘susu boxes’ is still a thing in many homes. But one thing is clear that adopting the culture of savings helps one to plan his or her future better.

I, therefore, had pleasant memories when I visited Tafi Mador in the Afadjato South District in the Volta Region recently and witnessed how some members of the community were very active in this local savings and loans business to create wealth to support themselves in their farming activities and other businesses.

The idea is to enable them to get sustainable livelihood to be economically independent and to be able to take care of their families.

Some residents of Tafi Mador returning from their farms

The community wealth creation method over the past eight years has helped many families in this community with a population of over 5,000 to meet their children's basic needs of education, food and shelter and has also helped them to expand their farms and grow their local businesses without chasing the banks for loans that come with high interest rates.

The community largely cultivates cocoa and food crops such as cassava, maize and vegetables and engages in bee-keeping (honey).

The savings and loan strategy was introduced to the community in 2013 by the Accelerated Rural Development Organisation, (ARDO), an environmental NGO pursuing the conservation of the Weto landscape under a project dubbed Community Development and Knowledge Management for the Santoya Initiative (COMDEKS).

The project is part of efforts to sustainably manage and conserve the Volta Region portion (Weto landscape) of the Akuapim-Togo mountain range, an attractive area with mountainous mosaic systems that comprise waterfalls, habitats of wide-ranging wildlife, sacred groves and caves for further development into an international tourist site.

Tafi Mador is, however, one of the communities within the Weto landscape where residents engaged in various environmentally regressive activities such as bush burning, charcoal burning and chainsaw operations that affected the sustainability of the attraction area.

John Mike Amoadzah, a contributor to the ‘susu’ scheme, on his beehive farm

ARDO thus provided the community with conservation tips and alternative livelihood such as techniques in bee-keeping, best practices of planting cocoa, providing them with seedlings and helping them create their own cocoa nursery to enable residents create their own financial means of supporting themselves to engage in sustainable economic activities that also promote the conservation of the Weto landscape.

The community savings and loans started with one group made up of 32 members. The success of the group has led to the formation of six other groups.

Every Sunday, members of the group meet for their weekly contributions to be made and the money kept in the locked savings box. Contributions are according to one’s capacity and the amounts are recorded in a booklet with a card given to the contributor with the weekly amounts contributed.

Some people are able to save from GH¢50 to GH¢100 a week. The loans are not limited to only members of the group but open to other community members who pay interest on the loans.

At the end of the year, each person received his or her contributions with the interest it has accrued accordingly.

Explaining how the concept has helped her grow her chop bar business, Ms Isabella Atime, who has been part of the group for over six years, stated that she was able to raise a substantial amount that she could not have been able to obtain from the bank.

“I make daily savings of GH¢20 from my food business and every Sunday I put it into the box. This saving habit has enabled me to educate my children, with the youngest at the nursing training school. As a farmer, it helps me to buy farm inputs for my farming activities without stress,” she said.

Similarly, another contributor, Mr John Mike Amoadzah, said his bee-keeping business and farming had been successful because he had made enough money through the savings box to get the needed equipment and input for his business.

The food crop farmer, however, said due to COVID-19, they found it difficult to get market for their farm produce and their honey as the frequent visits by their customers had reduced.

“This sometimes makes us incur some debt but we are surviving because of this savings box that we sometimes take loans from to support our work,” he added.

Poverty in rural areas has caused youth in these areas to migrate to big cities in search of non-existing greener pastures.

Meanwhile, there are a lot of opportunities in these rural communities and with some capital the opportunities in farming, livestock rearing, bee-keeping and piggery could be turned into real businesses for the youth.

The Executive Director of ARDO, Mr Pascal Benson Atiglah, said many of the negative activities affecting conserved sites in the rural areas were as a result of poverty.

“The bush burning, depleting of forests, charcoal burning and chainsaw activities are all happening as a result of the lack of opportunities in these areas,” he said.
While the communities need the support of the government to provide social amenities, among others, members of the communities also have a role to play in their own development.

According to Mr Atiglah, adopting savings and loans strategies could help the communities to support their own personal needs and also revive the communal spirit that many areas have used to develop their communities.

Creating means of financial support helps build a stable source of sustenance so that one would not have to struggle to make ends meet and also live their aspirations in life.

“For now, the members are doing well with their economic activities and gradually the focus is being shifted from destruction of the conserved sites to building their own crafts, farming and other businesses that are helping them,” he said.

He hoped that through the expansion of the economic activities, the community would be able to provide for themselves certain things they would have otherwise relied on government for.

Creating wealth in rural communities must not only be about saving and investing; community members must also identify and implement socially profitable investments that could create jobs for their youth.

While waiting for the government to play its role in developing communities, citizens can adopt these savings techniques to develop.

The individuals will not only meet their personal development aspirations, but by extension they will build a beautiful community.