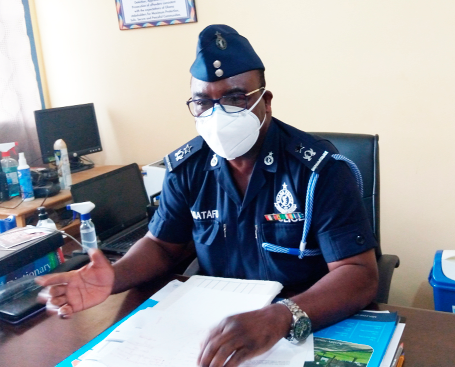 The Motor Transport and Traffic Department of the Eastern Regional Police Command, has cautioned drivers and vehicle owners ahead of its intended operation to clamp down on drivers who operate without licence and who drive unregistered vehicles in the region.

It has indicated that majority of the vehicular accidents and deaths in the region involved unlicensed drivers and unregistered vehicles hence the action.

The Eastern Regional MTTD Commander, Chief Superintendent Stephen Kofi Ahiatafu, during a press briefing in Koforidua last Friday, said the soon to be commenced operation had been necessitated by the routine report of careless and inconsiderate driving on the roads.

“Our observation revealed that most drivers do not put the trade plate on the vehicle. They also do not know the difference between a Drive from Port (DP) plate and Defective Vehicle (DV) plate. These vehicles are involved in series of accidents frequently; claiming several lives on the road due to careless and inconsiderate driving by the unlicensed drivers using them,” he said.

He urged the public to support the police in their bid to restore sanity on the road with their routine checks; instead of seeing it as harassment of drivers, as the practices of some of these drivers had put the road traffic acts to the test.

Chief Superintendent Ahiatafu said the region had recorded an astronomic number of accidents that had claimed 60 lives since the beginning of this year.

“From January 1 to February 13, 2021 we have recorded 60 deaths in a total of 45 recorded fatal accidents in the Eastern Region. The Kibi Division, especially the Suhum-Nsawam stretch, is leading the accident chart. Commercial vehicles killed 19, and private vehicles claimed eight lives. Motor cycles and tricycles, and pedestrian knockdowns claimed 20 and 13 lives respectively,” he said.

He urged pedestrians to be very cautious and take personal security with diligence while using the road as pedestrian knockdowns were caused by unlicensed drivers.

The Eastern Regional MTTD Commander reiterated that the police would vigorously embark on the check exercise to enforce the road traffic acts.

He said it was a similar action which saw 42-year-old Mr Apenteng Ofosuhene sentenced to a 40-month jail term for his involvement in an accident that killed a pedestrian while driving without licence, aside four other counts running concurrently last week Tuesday. The vehicle owner, Mr Hugh Frimpong Tano, also received a fine.