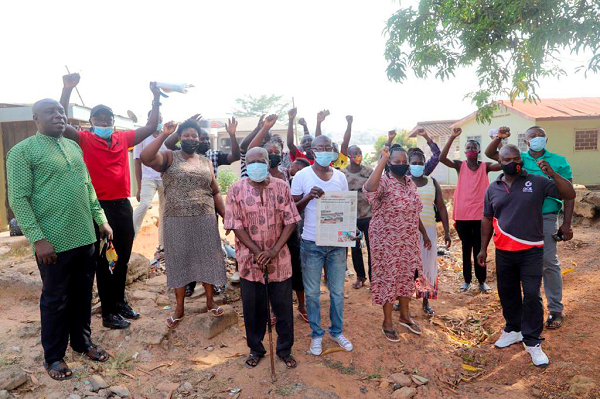 • Aggrieved residents of Chirapatre Estate expressing their displeasure at the failure of the Asokwa Municipal Assembly to evacuate the developers.
30.5k Shares

The contractors, Contracta Construction Limited, a Brazilian firm that built the new Kejetia Market, is on site currently working on the drains, but residents are still not certain that that portion of the road being occupied by the developers would be redeveloped.

Meanwhile, the one-week ultimatum given to the owners by the Asokwa Municipal Assembly to evacuate the designated parcel of land elapsed last Saturday.

The area, according to the assembly, was given to the developers temporarily and that they had agreed to move once the project began.

Chirapatre Estate, not too far from the Kumasi High School, had its first share of bitumen during the I. K. Acheamong era, as part of the construction of the estate which served as accommodation for public officers and mostly people who worked at the Kumasi Shoe Factory, adjacent to the estate.

This time round, residents are leaving no stone unturned in ensuring that authorities ensured that the developers finally moved from the site to pave the way for the much-anticipated project.

Led by Mr Frank Nyarko, an Interim Committee Chairman of the Chirapatre Residents Association, residents numbering about thirty, last Friday embarked on what they described as a peaceful demonstration to drum home their concerns.

They paraded the area and in the process, confronted the contractor concerning the development but they were told that they (contractors), were working based on instructions and appealed to the residents to redirect their grievances to the assembly.

"We will fight to ensure that authorities don't take us for granted," Mr Nyarko told this reporter, adding that they were marching straight to the assembly for their concerns to be addressed.

A retired educationist, 85-year-old Mr Anthony Adusei Poku, who with the aid of a walking stick joined the group, said he would personally be disappointed should authorities fail to act.

"I have lived in this estate for the past 65 years.  We all know that this stretch leading to the washing bay is part of the road," he said, stressing that they would do everything legally possible to protect government's property.

In an interview with the Municipal Chief Executive for the area, Mr Akwannuasa Gyimah, he said he had personally ordered the roads department of the assembly to move to the site to demolish the 'illegal structures' and allow the execution of the project.

"We would do everything legally possible within our mandate to ensure that the right thing is done," he told this reporter, and appealed to residents to exercise restraint and continue to have hope in the assembly.

However, operators of the washing bay and the welder's shop were busy going about their normal duties as of midday last Friday when the Daily Graphic visited the area.