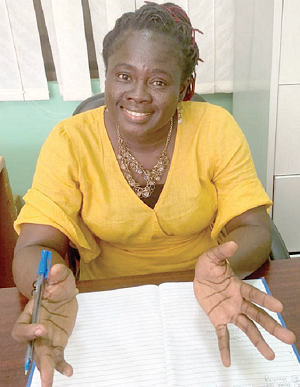 Over the years, society has not accorded practitioners and for that matter students of home economics their well-deserved recognition.

Society has not also been fair to many home economists through a long-held perception that the sector is meant for women or people who could not make the required good grades.

These perceptions seem to have gradually become a blot on the minds of many home economists who have come to accept the existing situation as the norm.

It is this seeming stereotype that an Assistant Lecturer at the Faculty of Home Economics at the University of Education, Winneba (UCEW), Ms Afua Kumi-Takyiwaa, is rallying home economics practitioners to assert themselves and stand out to be counted.

Ms Kumi-Takyiwaa has therefore called on practitioners of home economics to be assertive by putting themselves out for society to feel their impact the more.

Ms Kumi-Takyiwaa, who was speaking to the Daily Graphic at Winneba, said the usual baking, sewing, fashion among other vocations were aspects of the subject area.

She said contrary to the belief that home economics was for people with bad grades, it was rather for critical thinkers who were able to manage food, clothing or textiles which were three major ingredients per the course.

She described the course as an applied science and said home economics was also interdisciplinary and could be found in many study areas including biology, chemistry and economics and said it was basically the ability to manage the resources available for a quality life.

She explained that it had over the years been tagged as a study area solely for women although it was by and large to provide a home for all, and called on society to change that perception.

“It is about the individual, families and the environment and so as an institution which trains teachers we are teaching people to change the phase of the course to bring out the best from students they would also be teaching, to build their capacities to think outside the box,” she said, and added that “the Ghana Home Economics Association had also embarked on sensitisation programmes as a way of changing the age-old perception that it is all about cooking, fashion or baking”.

Throwing more light on the course, Ms Kumi-Takyiwaa said home economics was about managing how to live by applying principles, goals and objectives in the subject to improve the quality of life.

She said the sector was no more “a dumping ground” as people used to say, but that home economics practitioners when placed in any sector could fit in and work.

She said as myopic as majority of people were about home economics practitioners, that had made it difficult to employ graduates, stressing that a home economist could work with the government sector such as the ministries and also support policy making.

“Home economics practitioners do not only have to be bakers, caterers or seamstresses. If society wants to see a decline in social vices for instance, home economics is the key because practitioners are able to mould every home,” Ms Kumi-Takyiwaa emphasised.