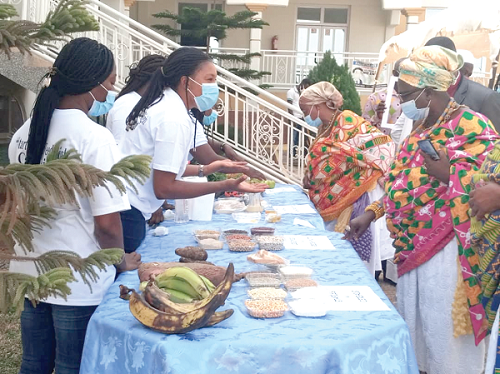 • Health officials showing some of the participants samples of foodstuffs used to prepare balanced supplementary diets for babies after six months
30.5k Shares

The Deputy Bono East Regional Director in charge of Public Health,  Dr Paulina Clara Appiah has admonished lactating mothers not to hasten to feed their babies with supplement diets.

She explained that newborn babies were better off when they were fed solely with breastmilk for the first six months of their lives.

The programme is aimed at encouraging mothers to stick to the recommended six months of exclusive breastfeeding and proper complementary feeding of babies until age two.

Launching the programme, Dr Appiah stated that the campaign was also aimed at ensuring increased child health, as well as reduced child mortality in the country.

Dr Appiah encouraged health workers, nursing mothers, the media and other stakeholders to help strengthen the campaign in their various communities to ensure the achievement of the purpose for which the programme was launched.

She explained that the "Start Right" slogan meant that newborn babies should be fed with breastmilk 30 minutes after they had been delivered until six months, while the "Feed Right" was to ensure that mothers would continue to feed their babies with breastmilk and supplement it with other nutritious diets.

Dr Appiah added that supplementing breastmilk with nutritious diets after six months meant that such diets should contain ingredients from all the food groups.

For her part, the Nkosuohemaa of  the Techiman Traditional Area, who is also the secretary to the Bono East Queenmothers Association,  Nana Amponsah Berko, who chaired the programme, called for measures to ensure the successful implementation of the objectives of the campaign to help protect the health of newborns and children in the country.

A lactating mother, Ms Mercy Maayi from Portor in the Kintampo North Municipality, who is nursing twin babies, shared her experience in exclusive breastfeeding and called on lactating mothers not to heed advice that would discourage them to stop the practice.

Participants at the launch, who were drawn from the various districts in the region, pledged to be ambassadors of the campaign in their various communities.

There was an exhibition of local foodstuffs that could be used to prepare supplementary balanced diets for babies after six months.