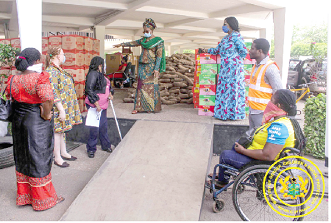 •Dr Afisah Zakariah (middle), Chief Director of the Ministry of Gender, Children and Social Protection, presenting yams and other food items to some vulnerable groups as part of the government"s social mitigation strategy against COVID-19 last year
30.5k Shares

It is almost a year now since the COVID-19 pandemic reared its ugly head in Ghana after it had ravaged other countries across the world.

A lot of measures were since put in place by the government to safeguard the lives of people, especially women, children and the vulnerable in society. However, a project, commissioned by the International Federation of Women Lawyers (FIDA–Ghana) through its Women Leading Voices project with sponsorship from Global Affairs, Canada, to review the governments communication or the Presidential update on COVID-19 since March 2020, shows that the government’s targeted population were not receiving the intended benefits of these social intervention policies.

The review, recognised and commended the efforts of the government and, for that matter, the President, Nana Addo Dankwa Akufo-Addo, at initiating a number of socio-economic and health system policy measures such as free food distribution by the Ministry of Gender, Children and Social Protection, free electricity and water among others, to reduce the spread of COVID-19 in the country.

The objective of the review was to assess the official communication on COVID-19 by the state, particularly, as to whether it took into consideration the needs of women, children and persons with disability.

The review also assessed the governments’ commitment to safeguarding, protecting and providing for vulnerable populations.

The project is aimed at making the process of providing information more targeted and gender sensitive to inform sensitisation and advocacy messages designed to contribute to the reduction of the impact of the coronavirus on women, girls and the vulnerable.

It is also to encourage a more consistent effort in the provision of gender sensitive official communication.

The project identified that while the governments’ socio-economic interventions during this COVID-19 period recognised that there were vulnerable groups to be supported, its efforts to support these groups did not specifically target the real needs of women, children and persons with disabilities.

It also identified that the social interventions to support the most vulnerable did not specifically consider the barriers that people with disabilities would face when asked to access relief items compared to persons without disability.

It said it was, therefore, critical that the weekly national briefings by the Ministry of Information and the updates by the President provided sex disaggregated data in order to identify populations, particularly women and girls with disabilities that were most at risk from the novel corona virus in order to provide targeted information and services.

It therefore, called on the government to decentralise support schemes to ensure targeting vulnerable population such as women, girls and persons with disabilities easily to track impact. It said decentralisation of such packages would improve efficiency, equity, accountability and transparency.

As a result, it said updates from the government on COVID-19 should provide information on how such future occurrences affected women differently from men, including women and girls with disabilities.

FIDA-Ghana through its Women Leading Voices project is also calling for children’s education to be prioritised saying groups that were already disadvantaged, such as adolescent girls, had the potential of experiencing the greatest risks and impacts when their education was interrupted.

It is also calling on the government to take steps to mitigate the effects of school closures on girls, boys and their families by ensuring education continues without interruptions to the lives of the children.

Schools are also called upon to ensure that they put measures in place to prevent and control the spread of COVID-19, with attention  paid  to  educating  and  protecting students and staff from the discrimination and stigma associated with the infection.

In its recommendations, the project called on the government to ensure that education response plans were gender and age responsive and reflected the lived realities of girls, children with disabilities and other marginalised children throughout the life cycle of education.

The government must implement substantive equality in cases of adolescent girls in school.

The project is also calling on the government to include women in response and recovery decision-making. Whether at the local, municipal or national level, saying bringing the voices of women into decision-making will lead to better outcomes.

It is also calling on women  leaders  in  communities to be engaged in the discussion of how to prevent or curb the spread of the virus to enable further awareness raising and strengthening relevant community support base for other women, children and persons with disabilities.

The project in its recommendation is also calling for a nationwide response plan on COVID-19 to be well grounded in a detailed gender analysis and must take into serious consideration the perspectives of all vulnerable population, particularly women and girls with disabilities.

Also it identified that development partners must also be willing and ready to engage with relevant institutions to allow for the reuse of funds to support women, girls and persons with disabilities in these difficult times.