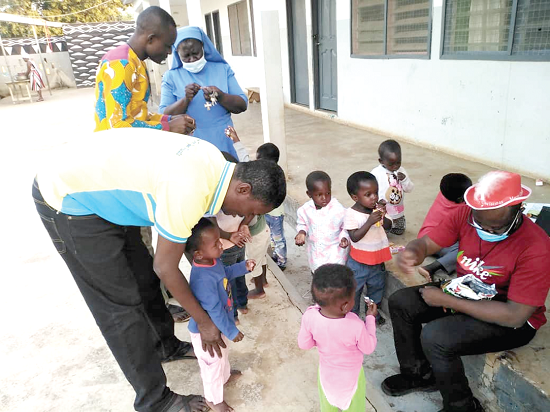 • Rev. Fathers Robert and Vitus together with Sr. Tengzagh and the children during their visit to the babies home
30.5k Shares

By the social settings, every child must be raised and nurtured in a family that comprises the father, mother, siblings and sometimes, the extended family. That is the ideal situation.

The reality is that, for one reason or the other, many children do not have this privilege and thus often find themselves being raised by other people who are neither their biological parents or family.

Some of these children could be left to fend for themselves on the streets, but for some, they are fortunate to find themselves being adopted by some foster homes or orphanages.

At these homes, the children are given a taste of what an organised, family life is, thus giving them a sense of belonging and a place to point to in the future as their humble beginnings.

One of such homes, is the Mother of Mercy Babies Home, an orphanage located at Sirigu in the Upper East Region.

Like most orphanages, the home has been heavily dependent on the benevolence of the Catholic Church that set it up and has not been able to expand to keep the children to their adulthood like many homes do.

The orphanage, which was set up in 1984, derived its name from the reason why it was set up.

It all began when a religious female congregation went to Sirigu to work. During their stay, they were visiting the local people in their homes and observed a situation that was disturbing.

Women in those days were delivering their babies at home and anytime a woman died during childbirth, that child was seen as the cause of the death of the mother, and was thus presumed to be a bad omen.

In order to prevent the occurrences of more deaths, disaster or calamity to the family, such babies were killed.

The Reverend Sisters witnessed one of such unfortunate incidents when they were about to kill a child after the mother had passed during delivery.

They begged the family to allow them to take custody of the baby.

The Sisters from then went round and began saving the lives of those babies and kept them in their convent where they lived.

After some time, the Sisters wanted to go back to their own country so they handed over the children to the parish priests of Martyrs of  Uganda Catholic Church at that time.

It was then that the parish priest saw the need for some people to take care of the rescued children.

The priest called on the Bishop, Most Rev. Rudolph A. Ankanlu, who was then the Bishop of Navorongo of the Bolgatanga Diocese of the Catholic Church.

Bishop Ankanlu in turn, called  on the Sisters in the convent and handed over that responsibility to them and since the gesture of rescuing was borne out of mercy, the home was christened Mother of Mercy.

Over the period, the reasons for sending children to the home has changed to include children who are abandoned, or have mothers who are not in a mental capacity to take care of them.

At the moment, the Mother of Mercy Home has 27 children managed by two Reverend Sisters - Rev. Sr. Delphina Zoomie, SMI Who is in charge of the home and supported by Rev. Sr. Beatrice Tengzagh, SMI

Rev. Sr Zoomie in an interview with the Daily Graphic, said the home was only able to keep the babies brought there up to four years after which they sent the children to Next Generation School in Bolgatanga, another homeless school for street children.

She explained that was done because the Mother of Mercy Home lacked the facilities to keep the children for as long as they wished they could.

“When the children attain the age of three years, we try to integrate them back to their families or we send them to the Next Generation as we do not have the facilities to keep them at Mother of Mercy to enable them go through education,” Rev. Sr Zoomie said.

According to Rev. Sr.  Tengzagh, SMI, the initial problem which led to the setting up of the home still persisted as out of ignorance, some mothers kept dying after childbirth because they were not attending antenatal clinics so when they gave birth at home, they lost a lot of blood and died in the process.

“Also, some mentally challenged women in town are impregnated by some men no one knows about so when they deliver, “we go for the children too since the mothers cannot take care of the babies.

“ We also receive children of mothers who are very sick and cannot breastfeed after childbirth,” Rev. Sr. Tengzagh explained.

Rev. Sr.  Tengzagh  said while it had been challenging maintaining the home because of the scarce resources, the joy of seeing some of the children grow up into responsible adults and integrated back into their families had been the main motivation for them.

"Since the beginning of this home, we have had many of these children who have made in it in life and some families have accepted them back into the family

“Others too have been adopted through social welfare and we the sisters often follow up to make sure these children are well taken care of either by their families or those who adopt them".

Rev. Sr. Tengzagh indicated that apart from the support they got from the diocese, for the upkeep of the children, they didnt have any other support and appealed for support from individuals and institutions.

During the Christmas festivities,  two priests of the Bolgatanga Diocese, Rev. Fathers Robert Abotozebre and Vitus Alnaa paid a visit to celebrate the festivities with the children.