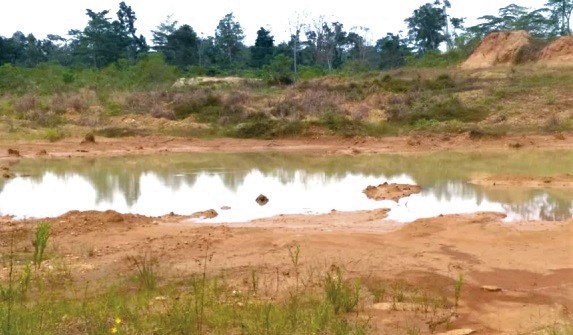 The environmental degradation has been attributed to mining activities in the community
30.5k Shares

Residents of Kwabeng, a predominantly farming community in the Atiwa District of the Eastern Region, say they are on the verge of an environmental crisis following years of mining in the community without appropriate environmental interventions.

According to residents, Xtra Gold, a Canadian firm, received their concessions from the Minerals Commission about 10 years ago.

They, however, accused Xtra Gold of selling portions of their concessions to illegal miners who had mined deeply into people’s farms, polluted water bodies and plunged the entire community into a state of disrepair.

The Kwabeng Anglican Senior High School also faces danger as some of the miners have extended their exploration close to the school block.

Areas so far mined are now valleys which require urgent reclamation in order to protect lives and properties, especially farmlands, a resident of the area stated. 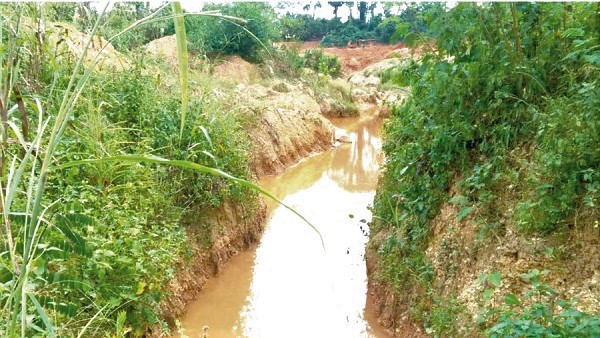 Out of concern for the deepening environmental harm, the unit committee for the area has taken a keen interest in the issue.

About 50 people, according to a member of the unit committee, Mr Maxwell Kwakye, have allegedly lost their lives having fallen into pits created by the mining activities.

A letter dated December 9, 2019 from the Office of the Unit Committee to Xtra Gold Mining Ltd expressed worry over the life-threatening excavated trenches.

Mr Kwakye, in an interview with the Daily Graphic at Kwabeng, appealed to all stakeholders to support the community in its quest to compel

Xtra Gold Mining Ltd to reclaim all the mined lands in the district to ensure the safety of its people and access to their farmlands.

“Our position is that should the company fail to reclaim the lands, they must not be given any concession anywhere in the country to continue destroying the natural vegetation, because it is against the mining laws and regulations to mine on a land without reclaiming it.

“We have reliable information that the company will soon move to another community, Akyem Pamang. When that happens, they will not reclaim the destroyed Kwabeng lands,” Mr Kwakye stated.

He urged the Environmental Protection Agency (EPA) to liaise with the assembly members and unit committee members for their inspections in any mining community so that they would be able to show them where the mining took place.

Currently, the boys’ dormitory of the Kwabeng Anglican Senior High School, areas around the Kwabeng Zongo, Kokoben and Akukuso are some of the most affected areas aside from the acres of farmlands.

A cocoa farmer and resident of Akukuso, Yakubu Mohammed, blamed land owners who failed to ensure the reclamation of their lands after mining.

He stated that some of the pits had been there for eight years while others had been left uncovered for about 15 years.

“These pits have become death traps. The situation is very threatening. Our children can’t play outside and we can’t allow them out in the night because of fear that they may fall into any of those scattered pits.

“What we want now is for Xtra Gold to reclaim the land for us so that we can put them back into good use. As it stands now, we are unable to do anything on the land,” he stated.

Mr Yakubu also said access to water in the community had become a challenge because the only stream, Akuku, that the people depended on had been destroyed through mining activities. “As a result, we travel to Kwabeng to purchase sachet water,” he said. 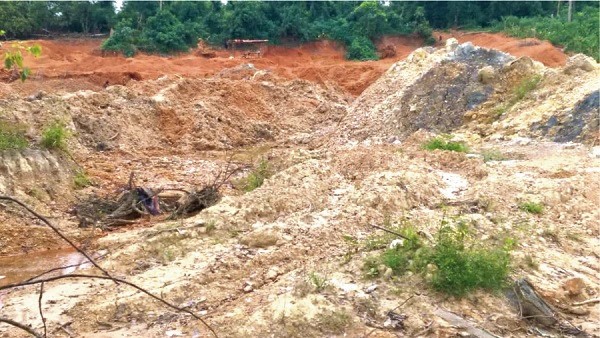 The unit committee in the area said it had for some time now been trying to get officials of Xtra Gold to address the environmental impact of their activities but to no avail.

They, however, deepened their resolve with a letter requesting a meeting with the management of Xtra Gold which was turned down.

Xtra Gold, in a letter, agreed to meet the members but not without a condition.

The letter dated August 21, 2019 and signed by the Managing Director of Xtra Gold Mining Ltd, Mr James Longshore, stated that they had received two letters from the unit committee requesting a meeting with the management of Xtra Gold.

However, the company refused the meeting due to the board of directors’ strict directive not to have further meetings with the unit committee because a community member, Mr Oteng Adjei, had filed a lawsuit against the company in the civil courts in Koforidua.

The letter stated that should Mr Oteng withdraw the suit, they would petition the board of directors to reinstate their ability to have future meetings with the unit committee. 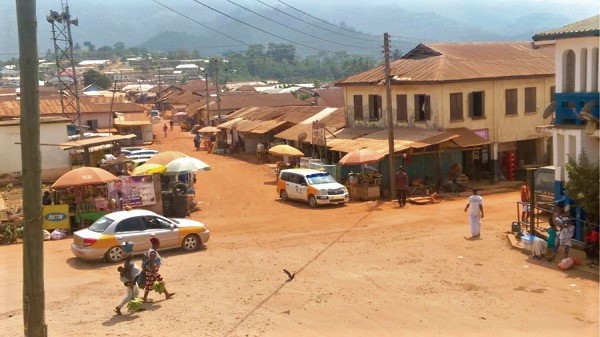 The Administrative Officer at Xtra Gold Mining Limited, Mr William Asiedu, in his response said his outfit had concessions at Kwabeng, Banso,

He said, however, that for now mining was ongoing at the Kwabeng, Moaso and Banso concessions.

Mr Asiedu admitted that there were mining pits that needed to be covered and lands to be reclaimed. He indicated that they had reclaimed all lands at Abisim and Ampetia which were under the Banso concession.

Mr Asiedu further indicated that they had five bulldozers working on the reclamation exercise and so far work had started in parts of the Kwabeng and Moaso concessions.

He stated that management was putting in place measures to ensure that more bulldozers were hired to complement the ones they already had to speed up the exercise.

“We will do our best to reclaim the lands before the raining season comes so that it won't affect the exercise,” he said.

“Even though we are going to Pameng, we are still working at Kwabeng and we will not leave any pits uncovered,” he assured.